A 100+ year old industrial engineering company in the UK wanted to give their engineers a device to measure waste in high-pressure systems. The methods they were using—measuring pressure at every point, and doing the math—took a ton of time and effort and were fairly inefficient. But there wasn’t any handheld device that engineers could easily carry and withstand the potentially explosive conditions in which the engineers were working. So they set out to make their own device.

With these criteria in mind, the design team set out to create a solution that could work for their engineers out in the field.

Immediately, the team knew that the ATEX compliance would influence the design a great deal. As part of the ATEX rules, the device couldn’t have any exposed charge pumps or printed circuit boards (PCBs). In order to remain compliant with ATEX, many devices cover their internal PCBs with an epoxy coating to prevent any potential sparks from igniting a dangerous gas in an enclosed space. 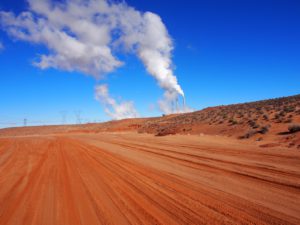 Luckily, one of the electrical engineers on the project had seen Azumo products online and at tradeshows. He knew that the display lacked charge pumps (unlike most other displays), so it was close to being ATEX compliant. With a little modification, it would be the perfect screen—for a few reasons:

With all of these benefits in mind, the team reached out to Azumo to ask some questions and collaborate on some solutions. Together, they were able to modify the front light panel so that it didn’t require a separate PCB, which would require extra epoxy protection. The FLP could operate on the main PCB, which was encased in epoxy to meet ATEX regulations. And with some help from the Azumo team, the engineers made the Azumo FLP work in their device by reorienting some connectors to fit in the epoxy-covered PCB.

The device is almost ready for field use. It’s ATEX compliant and it’s passed all of the rigorous testing (including dropping significant weight on the screen housing). And competitors in the space don’t yet have a tool as convenient and durable. They’re all using several devices to accomplish the same tasks.

How can Azumo innovate for you?

Read our case study to learn how Azumo collaborated with Aarcomm Systems to develop a device with front light technology that elevated them above their low-cost competition and helped avoid costly regulatory risks.

Visibility in Any Lighting Condition: Why Kestrel Ballistics Added LCD 2.0 to Their Heads Up Display

Visibility in Any Lighting Condition: Why Kestrel Ballistics Added LCD 2.0 to Their Heads Up Display