LEDs are simple components to integrate into a circuit design. They are energy efficient, low maintenance, they offer a very quick response time and instantaneous reach to output. The integration requires minimal design effort as long as some guidelines and rules are observed.  Read on to learn about the guidelines for driving front light LED.

Driving single LED light sources is relatively simple. A constant-current driver is recommended to deliver the desired current, with enough forward voltage output to accommodate the maximum input voltage of the LED source. LED light sources are not designed to be driven with a reverse voltage.

The necessity of constant current drivers comes from the need to protect the junction from overheating. The increased current generates additional heating of the junction which can lead to junction failure. By driving LED light sources with a regulated constant-current power supply the light output variation and lifetime issues resulting from voltage variation can be eliminated. Therefore, constant current drivers are generally recommended for powering LED light sources. 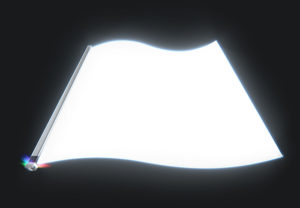 Using a constant current sink is recommended to ensure a stable current against variations in temperature, supply voltage and LED Vf. However, for cost-sensitive applications, current-limiting devices such as resistors can offer an alternative to constant-current drivers for restricting current flow. A tolerance analysis is necessary to ensure the operating envelope of the LED is within its safe range.

There are many trade-offs for using the single resistor approach. First, resistors generate heat and, therefore, waste power. The heat generated by resistors needs to be dissipated.

In addition, voltage changes from supply voltage variations will translate into changes in light output, and with resistors alone, there is no protection for the LEDs to prevent damage from high voltage. A few applications may tolerate these trade-offs but, for most applications resistors are not recommended.

Dimming LEDs is most commonly done either by lowering the current or through a technique called Pulse Width Modulation (PWM).

LEDs have a very quick response time (~20 nanoseconds), and instantaneously reach full light output. Therefore, many of the undesirable effects resulting from varying current levels, such as wavelength shift or forward voltage changes, can be minimized by driving the light engine at its rated current and rapidly switching the current on and off. This technique, known as PWM, is the best way to achieve stable results for applications that require dimming to less than 40% of rated current. By keeping the current at the rated level and varying the ratio of the pulse “on” time versus the time from pulse to pulse (commonly referred to as the duty cycle), the brightness can be lowered. The human eye can not detect individual light pulses at a rate greater than 200 cycles per second and averages the light intensity thereby perceiving a lower level of light.

Performance characteristics of LED light sources are specified for rated current and for an LED die junction temperature of 25°C. Since most LEDs operate well above 25°C, these values should be considered for reference only and the light output should be based on the anticipated operating temperatures.

For maximum longevity, it is recommended to operate the LED at the lowest current that provides acceptable brightness performance for the application. As for guarding against overcurrents, the exact amount of margin will depend on the actual tolerances of the system.