Backlit LCDs are so ubiquitous that the term has even made its way into an internationally popular band name. (We see you, LCD Soundsystem fans.) But that doesn’t mean the transmissive display type we’ve all come to rely on is the display of the future.

Traditional backlit LCD technology has its drawbacks, as consumers and design engineers know well. The good news is there are alternative display technologies out there, including a recent upgrade we call LCD 2.0, which is now available in sizes 7” and larger.

Let’s look at the drawback of today’s backlit LCDs and how they compare to the frontlit reflective LCDs (or frontlit RLCDs) that have emerged as a better alternative for many applications.

What You Need to Know about Backlit LCD Technology Today 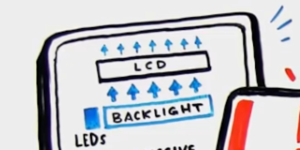 Over the past two decades, we’ve seen significant improvements to backlit LCDs:

But none of these changes solve the two fundamental problems that a backlight introduces to display design:

Both issues can be credited to the fact that backlit LCDs compete with ambient light, which is another reason why handheld devices with traditional LCDs have to expend more of their battery charge than should be necessary to make the display visible.

Additionally, 90% of the light they emit gets lost in filtering. This means that your battery-powered handheld devices are using more energy to produce light than you actually get to see.

Azumo’s frontlit reflective display combines the latest reflective LCD technology with a revolutionary light film panel that bonds to the front of your RLCD display, below the cover lens.

This thin panel uses a single LED light bar to mix light evenly throughout a screen, which yields a high-resolution display with a quick refresh rate without sacrificing color specs.

This display module is compatible with standard device software, which makes it easy to drop into any design that would otherwise rely on a standard LED backlight, which is great news for engineers who are looking to reduce the weight of their designs without reducing the size of the display.

While there are other display types in the market that may solve one or two of these issues – most notably organic light-emitting diodes (OLED) – no other alternatives solve the environmental visibility issues that plague backlit LCD design engineers and consumers.

LCD 2.0: An Energy Efficient Display for the Future

At Azumo, we believe the front light vs. backlight war will be won in the arena of consumer experience, but not necessarily in the personal devices consumers most associate with screen time.

Construction workers will use frontlit RLCD in the tablets and tools they use onsite without having to plug every device in every evening. Advertising vendors will find their profit margins on billboard advertisements as the amount of power required to light each square foot plummets

In hospitals, doctors’ offices, and homes, handheld tools that monitor everything from diabetes to blood pressure will be optimized for easy reading, free from the constant fear that the battery is about to run out.

Whether your device needs are medical, industrial, or personal, an Azumo display can go with you and last the distance.

If you want to know more about how LCD 2.0 can transform your next project, contact our team at info@azumotech.com.