Whether you’re sitting in your living room or driving in your car, odds are you’re surrounded by backlit LCD displays. From smartwatches to tablets, we’re so used to adjusting our display brightness and strategically recharging devices throughout the day that most of us don’t stop to ask what comes next.

The answer is LCD 2.0, and it’s a key component in reaching the next level of user experience in display for consumer, educational, industrial, and medical devices.

This update of the liquid crystal display that’s been dominant in the market over the past 20 years is a frontlit reflective LCD module that emits less intense blue light and requires less power than the backlit models we’re used to. It’s the future of display on everything from wearable devices to billboards, and the arrival of this technology is great news for consumers and engineers.

The Next Generation of Display Is Frontlit Reflective, Low Power LCD

You may already be familiar with the story of LCD: this technology emerged from an RCA lab in 1964 and changed the way we interact with moving images forever.

And consumers in all verticals are ready for a display upgrade. While there are fine workarounds for recharging laptops and other display-dependent devices on the go, the solution for today’s consumers’ biggest complaints isn’t just about the development of better, longer lasting batteries.

What’s next is a new generation low power LCD that is adaptable, light, and viewable in any environment for a user experience so subtly superior, you forget you ever had to hold your hand over your smartwatch to check the time. 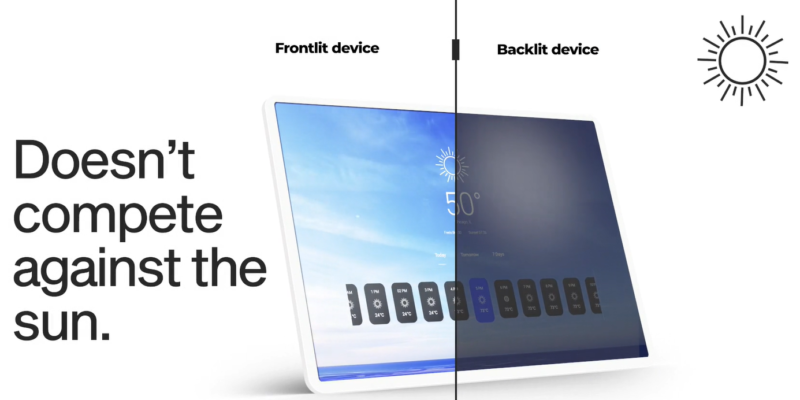 LCD 2.0’s front light display combines the power of reflective LCD and any ambient light to reduce the strain on consumer’s eyes and device batteries.

What would you do today if you had to use your laptop in bright sunlight? Increase the brightness of your display and drain the battery faster. What if you can’t see your smartphone’s navigation app while driving on a sunny afternoon? It’s the same story: increasing brightness and emptying your battery.

Even better, these benefits combine the best of LCD and e-paper displays. Consider the last e-reader you used. E INK’s ACeP e-reader takes 2.8 seconds each time you refresh the screen. Azumo’s latest Sharp demo takes 1/30th of a second to do the same task. This is why LCD 2.0 can do video and e-paper can’t.

The Benefits of Frontlit Reflective LCD Modules for Engineers

The benefits of layering an ultra-thin LED light panel onto a reflective LCD translate for engineers are not so different from the qualities consumers appreciate:

The Next Generation of Display Technology Puts Visibility First

As smart, integrated technology increases its presences in our homes, in our vehicles, and on our bodies, there’s a renewed imperative for better visibility, indoors or outdoors, without sacrificing battery life or overall performance.

By making use of the ambient light in any environment and enabling Memory-in-Pixel technology, Azumo’s frontlit reflective LCD module is a critical component for engineers designing where our personal and public technology goes next.

Curious if LCD 2.0 is a good fit for your next project? Schedule a quick discussion with an Azumo engineer today.

Meet with an Azumo engineer

The complex capabilities of today’s military, aerospace, and defense applications bring both extreme benefits and…