“American adults spend the majority of their waking hours looking at screens—and yet most of those screens, including the one you’re probably reading this on now, are based on the same LCD display tech that made its debut in the 1980s.”

As in the original black-and-white Game Boy, vintage Casio digital watches and the like, there is another way to build LCD displays: replace the backlight with a reflective surface. When light shines through the LCD layer in such “reflective LCD” displays and bounces off the mirror behind it, the result is a screen that is readable in any sufficiently bright ambient light.

Unlike conventional displays, whose brightness must be cranked up anytime we go outside, draining energy, these kinds of displays actually work better the brighter the environment they’re in. As a result, they can use up to 90% less energy than conventional LCD displays, says Mike Casper, chief executive of Azumo, a company that recently unveiled a reflective LCD display technology it calls “LCD 2.0.” 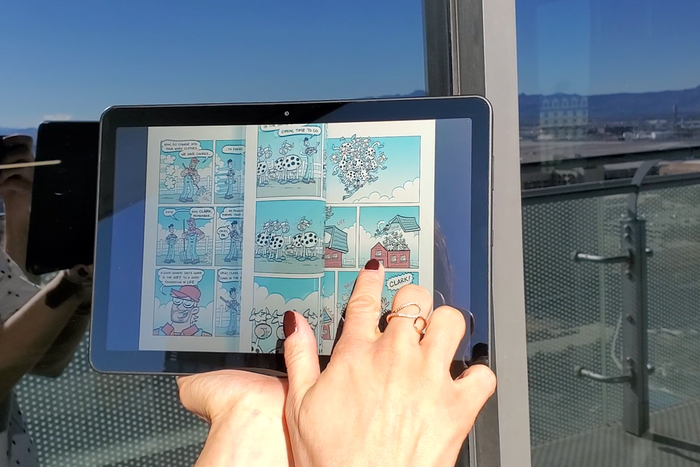 One drawback of these displays is that because ambient light comes in a variety of colors, images on these displays can take on the cast of that light.

A limited run of a few thousand prototype tablets using Azumo’s display tech has been produced by its partner, Foxconn, which also assembles the iPhone for Apple. Because reflective LCD displays can be made on existing LCD manufacturing lines, these displays could be both inexpensive and take advantage of the relative robustness of LCD panels.

“When we saw Azumo’s technology, we realized that it is definitely not for the mass market, but there is a niche, a need, a section of the market really looking for this,” says Paul Hsiung, vice president of FIH Mobile, the Foxconn subsidiary that has partnered with Azumo to manufacture these displays. The niches include tablets for outdoor use, such as on construction sites, and for educational settings where all-day battery life is key and the ability to withstand a drop or a spill matters.

On this episode of the Commercial Integrator AV+ podcast, Dan Ferrisi, host and editor-in-chief, chats with Mike…